In this tutorial we will use the predefined process parameter PerovskiteOxide110 PerovskiteOxide110, and a dummy image designed to look like an HAADF image of the perovskite SrTiO3. It contains various parameters and names for processing a perovskite oxide structure projected along the [110] direction. The master function atomap.main.make_atom_lattice_from_image() takes the atomic resolution signal, process parameters and optimal feature separation. This means that you probably need to run atomap.atom_finding_refining.get_feature_separation() and find the best pixel separation first.

Depending on the size of the dataset, this can take a while. The processing will:

This returns the atom_lattice object, which contains the sublattices of both A and B cations. 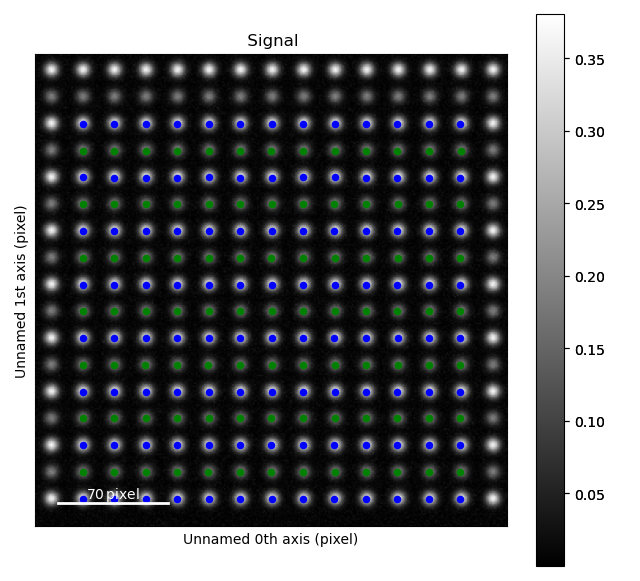 You can make customized process parameters for the structures you are studying in order to make analysis with Atomap more automated. In the atomap.process_parameters you can add your own classes with process parameters for your own structures. This section will give an example of how to construct these classes. It is assumed you have read Become a contributor first, where there is some information on how to develop code for Atomap.

Our example is the imaginary YourStructure, which consists of two sublattices, SublatticeA and SublatticeO. SublatticeA is a sublattice consisting of heavy transition metal atoms, while SublatticeO is oxygen (light atoms). This means that SublatticeA will have good contrast in ADF-images, while SublatticeO is only visible in ABF-images (together with A, of course). The example is constructed to give an insight in how you program the parameters to use the different images to find the atom positions. Of course, if all the sublattices in your real material are best resolved in ADF, this image can be used for all.

As the heavy A-atoms are best resolved in ADF/HAADF images, the dark field image will be used to find the atom positions of A. A class for the process parameters for SublatticeA can look like this:

To find the atom positions in SublatticeO, an ABF image is used.

Play around with the refinement configurations and neighbor distances to find what works on your images and structures.

The above sublattices belong to YourStructure. This class inherits from ModelParametersBase can look like this:

An important setting here is the peak_separation. The peak separation is a distance in nanometer, a little less than half the distance between the atoms in ‘A’. The number is used to find the pixel_separation for the initial peak finding for the brightest sublattice. Therefore, the scale of the image must be calibrated prior to processing.